As I already mentioned, there's a second set of pictures I took during our days side by side with the Hector's Dolphins in New Zealand. According to the Department of Conservation today the total number of Hector's Dolphins is esimated around 15,000 animals. They are mainly threatened by fishing (nets), which is/are responsible for substantial population declines in the last four decades, but also by oil and gas exploration, boat strikes, mining, tourism, noise and diseases. At approximately 1.2 to 1.6m in length, they are not only one of the smallest and rarest but in my opinion also one of the cutest and most playful cetaceans. Finally we've been lucky enough to not only spot them in The Catlins, we also had some sightings along the west coast around the amazing swamp forests of Ship Creek. A few times I was lucky to capture them in a bigger scale right in the frame. 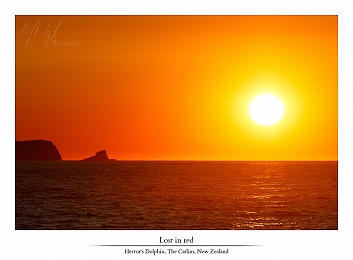 The presence of the dolphins made the stunning sunrises above the sea even more exciting. 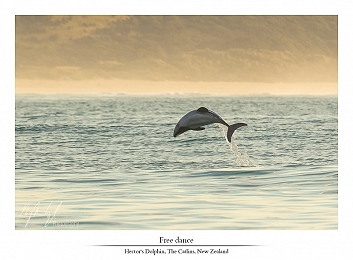 All of a sudden this one leaped out into the calm misty morning. 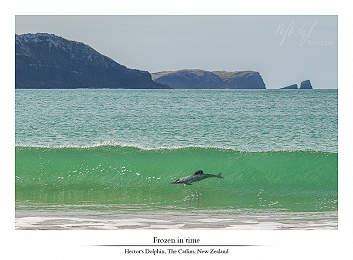 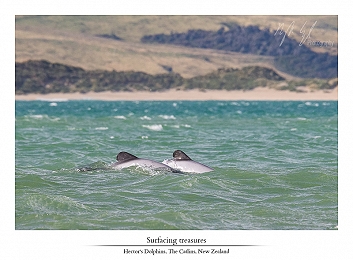 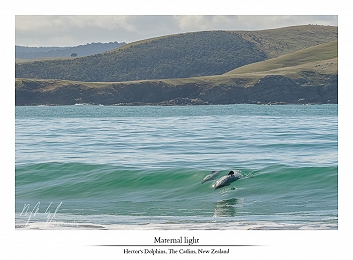 Although the animals come into this bay to nurse their offspring, it was an unique moment to spot this young one riding a wave side by side with its mother. 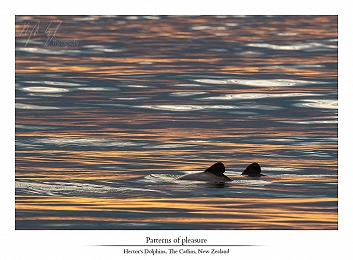 Needless to say, I was more than excited to manage to capture them riding this picture-perfect wave in such an incredible morning light and infront of the beautiful rough coast line. I don't know about you, but for me this is among my top three favorite images I ever took and I guess it's a good ender for this series.
If you want to receive a short e-mail notification every time I post any news in my blog on this website, just drop me a line to photo@rupertkogler.com and I will put you on my mailing list. And of course I will remove you from the list anytime you want me to.

Swell of gold part I - New Zealand part I

As most of you probably already know, we spent some time in New Zealand this year. For two of us it was our second stay in Aotearoa. This time we've been there in February, March and April and it was quite sure the best journey we did so far, because we travelled with our son Tim, who was five months when we started, for the first time. And, of course, New Zealand is an incredible place in any case. We spent the entire time outdoors and it seems extremely important to us, to connect Tim with real nature and it is so rewarding to see his great excitement about all the natural wonders when we're out. Even at this very young age. Maybe more on that in some of my upcoming blog entries ...

Although there are still lots of older images of the past year left to share here, I would like to start to display some sets of my New Zealand pictures in between. This first series shows the first part of photographs of one of the world's rarest and smallest dolphin species, the Hector's Dolphin. They are declared as endangered on the IUCN Red List and can only be found in the waters around New Zealand. I was observing and photographing these absolutely amazing animals about six to ten hours every day for six nights on this particular beach and I was rewarded with some of my most memorable wildlife moments so far. All the images have been taken from the beach or the shallow waters, but I have to admit I got pretty wet most of the time ;) This is what I was looking for most of the time. A short glimpse of one of these small dorsal fins when it suddenly popped up somewhere on the water surface. 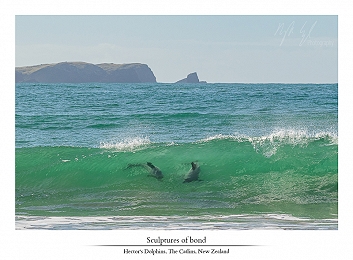 The swell in this bay was actually picture-perfect. So I also spent lots of time just watching the waves break. On our second day there, I noticed a dolphin riding one of these waves. I didn't expect that at all, but after that, I knew what I will have to look out for. 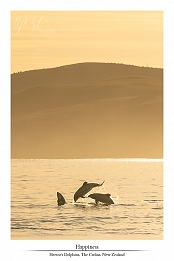 Although I could spot their backs and dorsal fins pretty often, I could only see them leap out of the water about two to five times a day. And since they mostly did that completely unexpected somewhere on the sea, it was a bit of a challenge to get just a handful of proper breaching shots. What a fantastic place to show your offspring a few of mother nature's treasures. 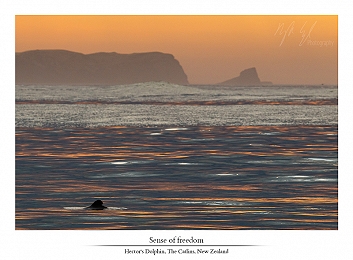 Basically I prefer to show wildlife in a rather small scale in its habitat and the Hector's Dolphins are no exception. So I mostly tried to include the beautiful rough coast line in my images, especially when the conditions were appealing. But since I spent this whole particular week on the same beach, you'll find the same coast line in the background on most of the images. Beside the composition matter the smaller scale and the shorter focal length also increased my chances of getting the animals in the frame. Another wave the guys were surfing during my stay at this beach. This time at early dawn. It was a quite difficult undertaking to capture them in one of the waves, especially on overcast days or when the sun was low like during the golden hours. Due to the reflection of the sky on the water surface, I couldn't see the animals before the wave was big and steep enough to create its own shadow. But that also meant, that the wave was going to break just the blink of an eye later and the dolphins will disappear beneath the surf again. So the time frame between spotting the mammals, creating a composition, setting the focus and taking the picture was just about a very few seconds. I'm pretty sure the main reason for the dolphins to ride the waves is just joy and playfulness. But beside that, they probably also use them to save energy and gather pace without any effort. In this image you can gain an impression, how fast they get. Fast enough, that cavitation (a phenomenon in which rapid changes of pressure, due to a fast moving object, in a liquid lead to the formation of small vapor-filled cavities) occurs. 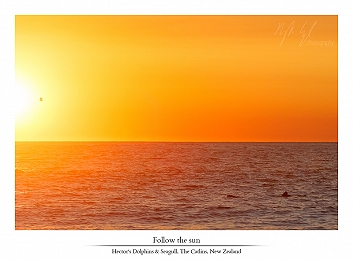 Sometimes it took me a few hours tho get the first glimpse. And sometimes they disappeared after that again for another few hours.
But although without the dolphins, this area is just fantastic and offers lovely calm bays with perfect surf, amazing rough, rocky and kelp covered coast lines and lots of other rare and beautiful wildlife like Yellow-Eyed Penguins, which are also among the wolrd's rarest penguin species and also declared as endangered on the IUCN Red List with only about 4,800 sexually matured individuals. In one of the coming sets I will also share a few shots of some of the other treasures we could find there.

If you want to receive a short e-mail notification every time I post any news in my blog on this website, just drop me a line to photo@rupertkogler.com and I will put you on my mailing list. And of course I will remove you from the list anytime you want me to.

When it comes to birds, the Neusiedler See - Seewinkel National Park is just a fantastic place. You can easily spot about ten different species of rare and special birds, you won't see anywhere else in Austria, in only one day. From bigger ones like Great Egrets, Spoonbills or White-tailed Eagles to very small ones like Wrens or Crests. But, of course, the Seewinkel is also a significant habitat for other animals, like mammals, insects, amphibians and reptiles. The best season is spring and early summer when all the birds are nesting and raising their chicks and lots of new life pops up everywhere. But I also like to go there at any other time of the year, since there is always something to discover and it actually pays off every time. Below you will find the last images of this national park from the past year I will show here, so I kindly invite you to browse through this series. 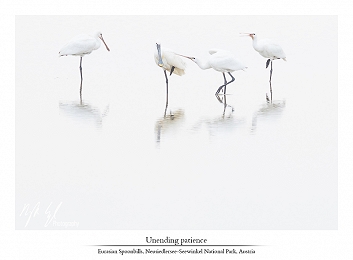 This one goes out to all the parents out there ;) 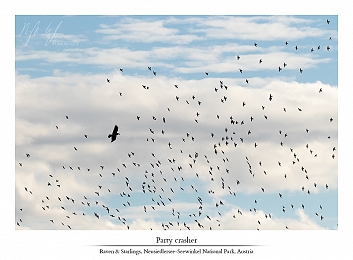 In late summer huge swarms of Starlings are quite common in the area. 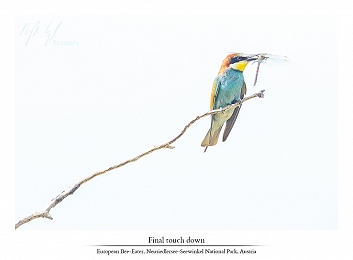 Even the prey of these beautiful birds is beautiful. 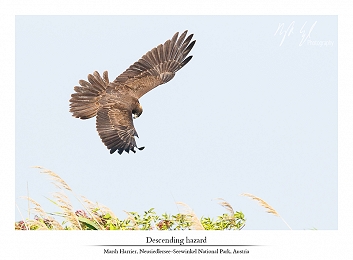 The wide belts of reed around Lake Neusiedl are also an important hunting ground for birds of prey. 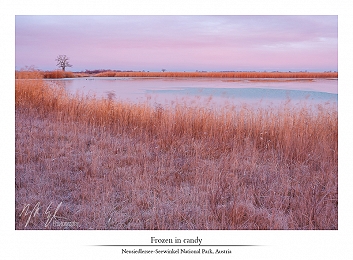 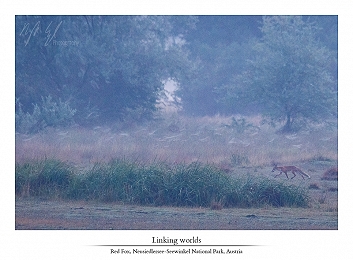 What a beautiful fabulous creature and what a pleasant scenery. 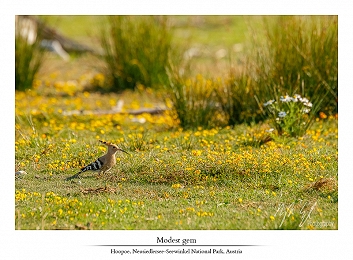 Always such a pleasure to spot one of these extraordinary guys. A few Gray Geese crossing the shallow waters at sunset while a Great Egret is on the hunt for fish. A Mallard touching the water surface in great afternoon light.
If you want to receive a short e-mail notification every time I post any news in my blog on this website, just drop me a line to photo@rupertkogler.com and I will put you on my mailing list. And of course I will remove you from the list anytime you want me to.